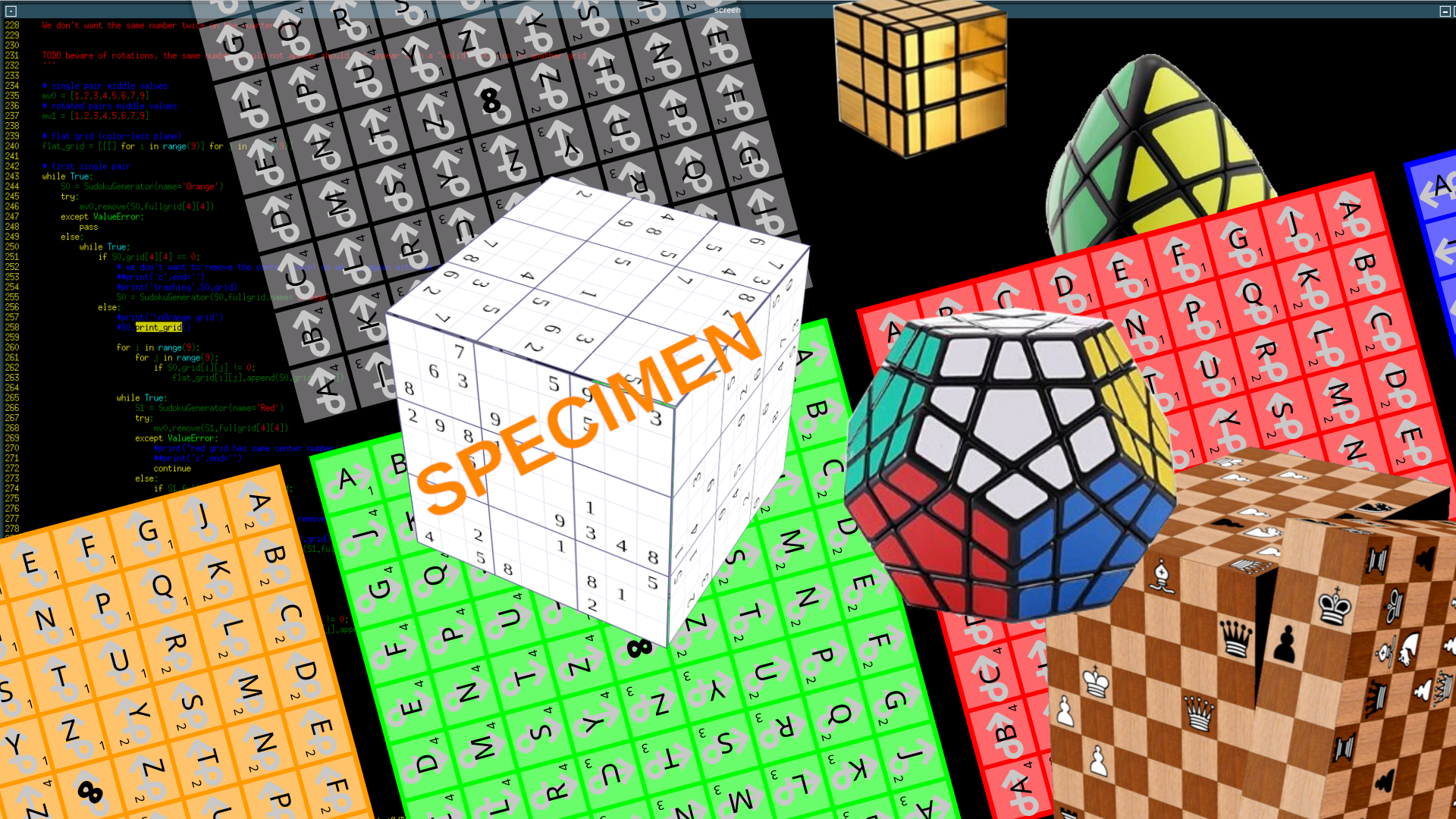 The Sudokube is a 9⨯9⨯9 Rubik’s Cube with a particularity : instead of displaying a different color for each face, it features 6 unsolved Sudoku Grids! Sudokube is hard not only because it’s a fairly large Rubik’s Cube, but mostly because the player must solve each Sudoku grid before being able to solve the Rubik’s Cube ; this is most tricky since - when the Rubik’s Cube is shuffled - there can be a lot of possible arrangements of the cubelets.

However, we also know there are only 6'670'903'752'021'072'936'960 different Sudoku grids1, so it has become obvious that we have some collisions ; in theory, it should therefore be possible to have every possible Sudoku grid on our cube. Does it mean we’ve failed?

Above is a deconstruction of a 9-Rubik’s Cube ; let’s look at its properties :

This leads us to some conclusions:

Taking the minimal-clue Sudoku puzzles which have 17 of them2, it becomes obvious we will have a minimum of 102 clues total, leaving 384 blank boxes. Now, can we still have a unique solution (without adding additional clues such as orientation) in this case? It seems not.

After a few hours of coding, I came up with a script that generates some stickers that can be added to a 9x9x9 cube (ideally monochrome or previously scrambled) ; I decided to not go through the hassle of giving the Sudokube a unique solution (there may be some admissible permutations on blanks) but since a regular Rubik’s Cube also has many solutions, I figured it’s totally OK : these permutations are not the same type that a standard Rubik’s Cube allows so this will get you out of your comfort zone either way. Otherwise, no permutations are allowed on cubelets with a symbol.

There are a few variants, of which my two favorites are displayed below: 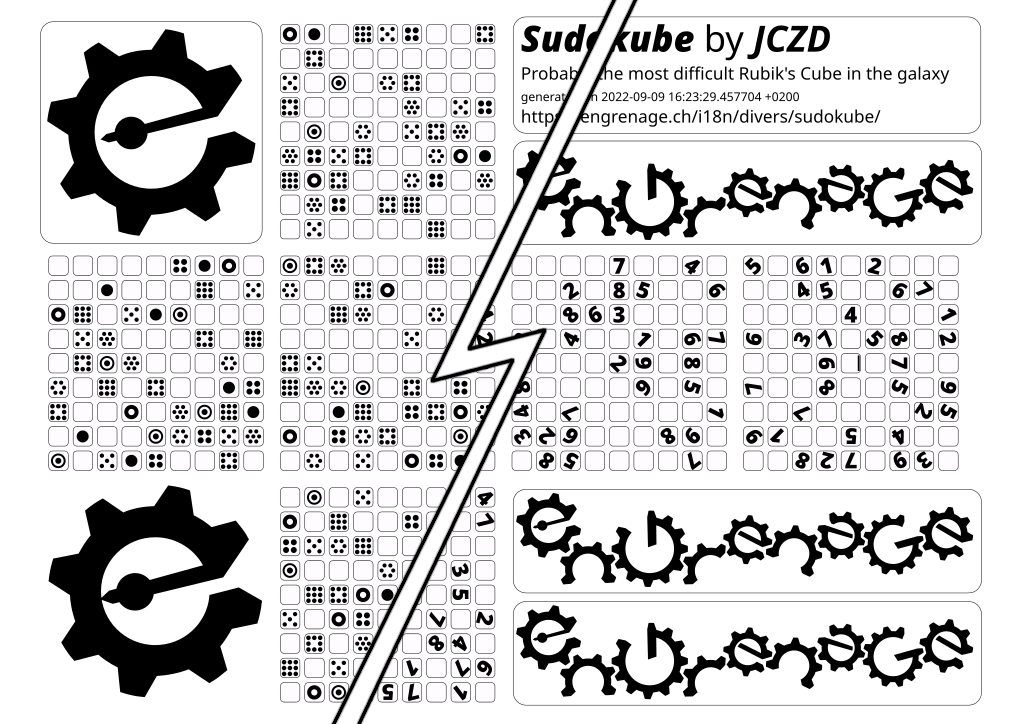 You can contact us to get your own set of stickers or even a cube with the stickers on it (and to make it extra difficult, it will have been scrambled for you) ; your Sudokube s very likely to be unique and will be signed (the top-right sticker acts as a certificate of authenticity).

A much simpler version of the Sudokube is one where the Sudoku grid is laid out on a 3⨯3⨯3 Rubik’s Cube. Very boring, but good for demonstration purposes. Another one is base-4-based but from the maths involved, it seems it is not possible to have any blank squares so it’s quite boring too. It’s just a little more obscure (and less permissive) than a standard Rubik’s Cube : there are too many possible permutations and this makes it boring (again) ; taking into account the equivalence of symbols, it seems there really aren’t many distinct solutions available (how many? this is yet to figure out).

Here is a full example, taking into account 45° diagonals: 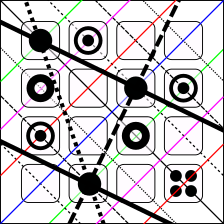 It becomes obvious when we consider the semi-diagonals shown in thick lines ; there are some collisions ; this relates to how Cantor was wrong but is beyond the scope of the current article.

This yields some very interesting conclusions on 3-D space and number- or group-theory, but this is also beyond the scope of this document. More on this later.

The Rubichess is 8⨯8⨯8 Rubik’s Cube where each face features a game of chess that was started ; since there are only a finite number of possible arrangements on the chess board (one cannot randomly set the pieces on the board and expect there will be a valid set of moves that will put all parts in this position) it should be possible to find a set of six chess games that yield a unique, valid solution for all faces of the Rubik’s Cube. 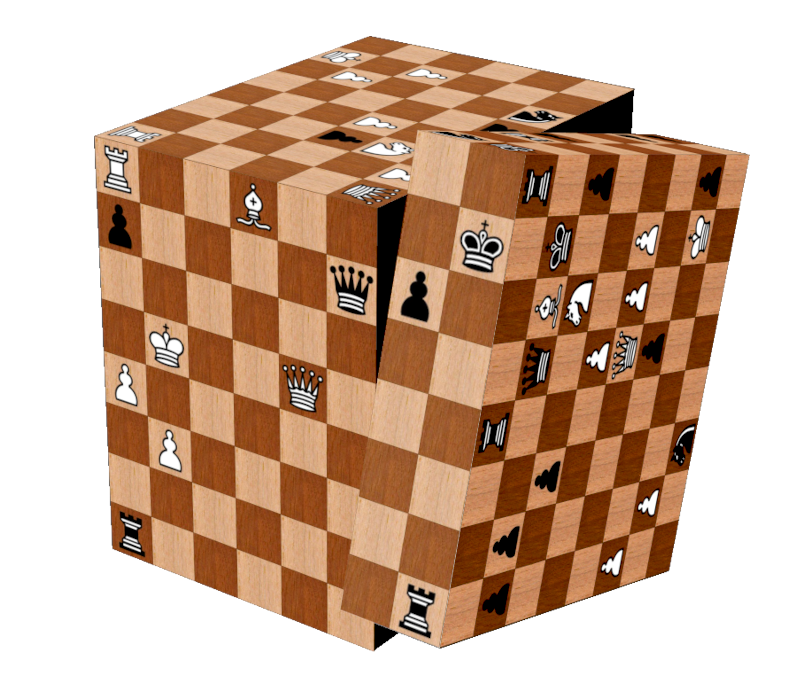 Same like above, only it’s a 19⨯19⨯19 cube, featuring games of Go. This one is massively hard, whether it is to construct or to solve. At the moment, I’m not sure this is even possible at all, mainly because the stones have no orientation.